Home » Value in the Valley 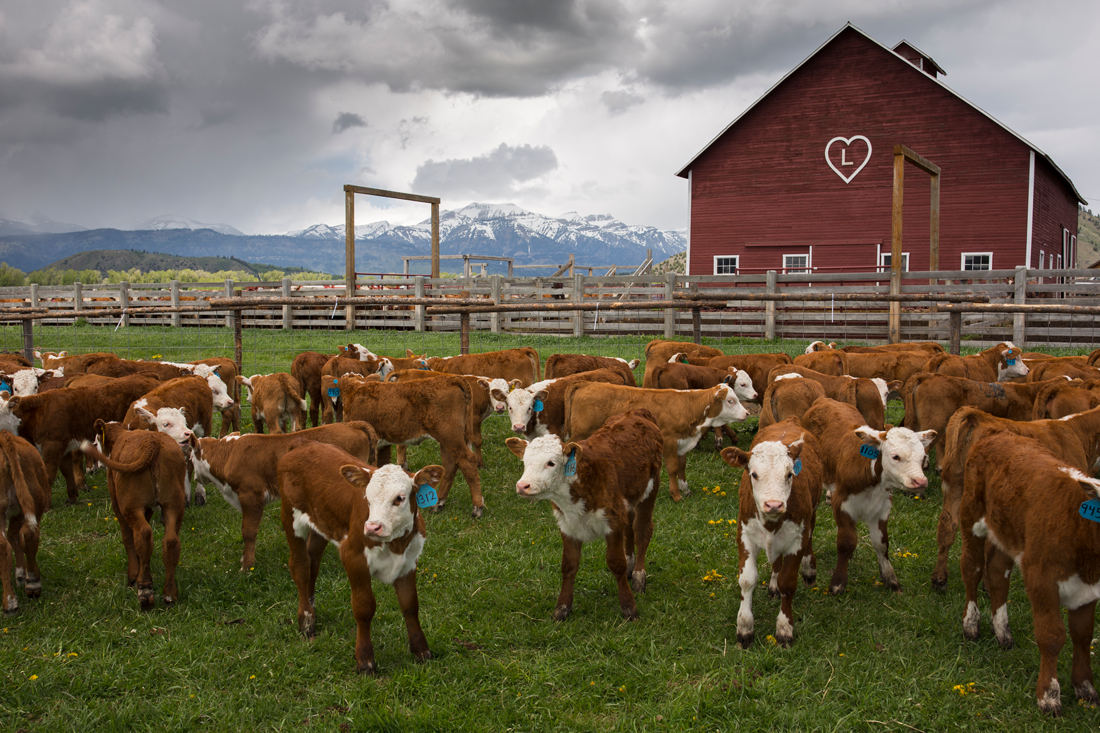 “It is convenient,” says Chase Lockhart of ranching within sight of the grocery store. “If I lived out at the end of the road in Big Piney [Wyoming] and ran out of coffee, it would be a 20-minute ordeal. Here, in two minutes my problem is solved.

“Though I can’t tell you how many people drive in here, saying, ‘You got a cow out there having a calf!’ Like, ‘Good, that’s what they’re supposed to do’.”

Nearly five million tourists annually funnel through Jackson, full-time population 10,135, to visit ski resorts, and Grand Teton and Yellowstone National Parks. “Most people that come to Jackson,” Lockhart continues, “don’t know the difference between me, and the guy at the shootout in the town square or leaning on the bar wearing a cowboy hat.”

Many Jackson residents also don’t understand the financial challenges and variability of the ranching business. In 2004, the Lockhart cattle herd contracted brucellosis from grazing among elk. Regulations at that juncture forced the family to destroy the entire herd; calves, cows, bulls and yearlings…close to 900 animals. At the time, the Lockharts held the last active grazing permit in Grand Teton National Park. With no cattle, they filed non-use on the permit and the park fully closed grazing access.

The family re-grouped, and decided to transfer ranch operations to Chase and his brother Cody. “We leased the ranch one summer,” says Chase Lockhart, “and hayed it the next. But if I’m going to hay, I want to feed it to my own cows. So I began re-building the herd.”

To add value to his cattle, Lockhart purchased registered Herefords to sell bulls and replacement heifers. A couple years of attending bull sales and Hereford shows taught him it’s hard to compete with large producers, and the added costs of showing, heated barns, and embryo transfer were beyond his resources. “Also, I’m not really in ranching country,” Lockhart admits. “Jackson is not a common place people come to buy bulls.”

Casting for another value-added opportunity, Lockhart saw Jackson’s 200 restaurants reviewed on TripAdvisor.com, the popularity of local food, and the 145-year-steady tourism industry. “I figure half of those tourists eat hamburger,” Lockhart explains, “and if I can sell the [restaurants] a fifth of that hamburger, that’s still a lot of hamburger.”

A restaurant where a friend worked was Lockhart’s first customer, and Lockhart talked up chefs and meat counter clerks across Jackson. “We tried to get beef into people’s mouths,” he says of beginning marketing, “and that meant giving it away or breaking even on it. I did a lot of things I didn’t want to do, like host ranch tours and go to the farmers’ markets in the rain.”

The big break for Lockhart’s new business model came from Signal Mountain Lodge, a concessionaire on Jackson Lake in Grand Teton National Park, signing a ground beef contract with Lockhart Cattle Company. “They sell an absurd amount of hamburgers,” Lockhart says. “They buy 12,000 pounds of one-third pound patties a year. I’m like, ‘36,000 patties, coming up!’ It showed we could sell beef locally, and it makes sense to grass-finish as we don’t grow, or have a way to store and feed, grain.”

With the valley filled with dormant ranches, Lockhart easily finds grazing. “I can tie up grass relatively cheaply from guys who have gotten out of the ranching business,” Lockhart says. “I have six different private leases. Some only support 30 pairs and the largest piece can hold 200 head.”

Lockhart cautions when working lands are carved up for ranchettes, many of the small acreages are left without enough irrigation, or with no access or corrals for livestock. “But it’s amazing what I came up with,” he continues. “I stash some [cattle] on a dude ranch. [Guests] pen the cattle once a week, and I get free grass.”

In the spring Lockhart feeds three generations of one cow: a calf that’s on its mom, one born last year, and the 2015 model almost ready for slaughter. A key component to selling beef weekly is easy access to a meat processing facility, which Jackson did not have. Lockhart needed a meat processor with flexibility to do cuts and process according to client request. He connected with the neighboring Hog Island Meats wild game plant, located seven miles south down Highway 89, which the owners wanted to grow into a state-inspected locker. Lockhart Cattle Company financed the plant upgrade in exchange for part ownership and management input, and gained a close-by, custom meat processor.

“The plant still does wild game in the fall,” Lockhart explains, “and that’s a challenge. We have to shut down beef processing for several months, as the facility isn’t state-inspected when it processes wild game. But every stage of the business has challenges. After slaughter is packaging, inventory, pricing model, and distribution. Ranching is the easy part.”

Lockhart cattle finish on self-feed hay, even during summer, and finished animals slaughter at 18-30 months of age and 1,150-1,300 live weight. “The beef hang pretty consistently on the rail at about 625 pounds,” Lockhart says. “The end of July is often when I butcher a 28-month-old for a client one week and a 17-month-old the next. Customers do notice meat is smaller and less marbled.”

Most customers want one type of meat cut, so Lockhart tries to group orders according to the animal. He will accept a steak contract if the ground beef from the animals providing that steak can be sold elsewhere. “The key is to have an outlet for grind,” Lockhart says, “and be willing to break even on it. Selling steaks at a premium offsets ground beef selling as a wash. The red meat business is low margin. I try to be vertically integrated to get a little piece of the margin the whole way through.”

Selling fresh beef allows Lockhart to respond to demand quickly. Because this causes him to decline customers, he recently began to keep frozen inventory. “I say no to a lot of people,” he regrets, “because they want 50 tenderloins next weekend for a wedding. They would pay 18 bucks a pound if I had it. But I’d need to butcher 25 head to get that many tenderloins.

“For a long time I would tell people, ‘Yes, I’ll figure out how to do it.’ Then I would get off of the phone and swear. Now with steadier demand, I have flexibility to say no. I also now make all deliveries on the same day so I’m not jumping out of the swather in the middle of haying to make a $200 delivery.”

In the summer, Lockhart can deliver a whole beef to Jackson Whole Grocer & Cafe on Wednesday and it’s sold out by Saturday. His attempt to sell to his neighboring Smith’s grocer is stonewalled by corporate management.

Lockhart admits small meat-suppliers do take extra effort. If the vacuum seal blows on a couple of meat packages, he might not be able to re-stock that meat cut immediately for the grocer. “I’m not the Sysco truck with 60 other packages sitting on the shelf,” he acknowledges. “That’s why I need to make quality worth the pain in the (butt).”

Sitting on his truck tailgate, Lockhart says posh restaurants purchase 30 pounds of beef a month from him for tartare—a minced, raw meat dish. “Eye-of-round is sought after for beef tartare because it has no fat in it,” Lockhart explains. “Tenderloin is also used, and sirloin can be if trimmed really well.”

Jackson’s fine diners want delicious food presented ornately, and they want to learn about their foods’ origins. “People will look through a menu and order something just because it’s sourced locally,” Lockhart says, “rather than what they originally intended to eat.”

The best marketing tool is ranch location abutting city limits: an eye-catching two-story red barn, Lockhart brand emblazoned white on the barn’s peak, surrounded by Hereford cattle grazing lush meadow. “But when my cows get out,” Lockhart says ruefully, “they aren’t in the neighbor’s pasture. They’re in Smith’s parking lot.”

Last year, Lockhart Cattle Company discontinued registering their Herefords. Lockhart shares management decisions with his brother, who thought they might as well register the cows because they could. With beef sales growing, Lockhart suggested that not weighing calves and filling out registrations could gain efficiency.

“We decided we are in the beef business and not the cow business,” Lockhart says of the final decision. “I raised those bulls, put horn weights on and ultrasounded them, and made no money. I was like, ‘It’s not even a hobby I want. I want to mountain bike, that’s a hobby…not a bull herd.’”

Lockhart plans to cross breed to Red Angus bulls, and hopes to try Wagyu bulls in the future. “I want to cross my cows to Wagyu to see if it helps with marbling,” Lockhart says. “The problem is Wagyu aren’t a hardy breed and don’t weather as well as Angus or Hereford.

“It’s fun to try new things, but it takes a long time. Once I buy new bulls it will be two years before their offspring are on the rail and I can evaluate beef quality. Then if I try different bulls, it will be five years before I make major changes. And I want to be on the forefront of beef taste.”

Lockhart sells 70 percent of his beef in the summer, and 30 percent in the slower winter months. Current sales do not balance the amount of work. “If I can figure out how to scale it for small margins, I have a shot,” Lockhart says.

There is more demand than supply for Lockhart beef. Lockhart is penciling out how to run more cows and slaughter five days a week. “I used to think one cow is the same work as 100 cows,” Lockhart says, “because they all need water and feed anyway, but that’s not true. Every cow is more work. Every beef slaughtered and every customer comes with more problems.

“Every employee hired and every piece of infrastructure—I bought a freezer trailer to deliver meat—has complications. For the trailer, I need to work on the cooling unit, keep the tires blown up, and fix the generator. At the farmers’ market, the tent blows away. At every step there’s something. It’s not about just buying more cows.”

Value-added products, such as hot dogs and bratwurst, will reach a new market, but Lockhart needs to grow his beef herd first. “I don’t have the beef to experiment with right now,” he says. “I can’t slaughter enough beef on a weekly basis to set two aside to play around with recipes.”

Along with recipes, processed meats bring more food safety regulations, shelf-life tracking, packaging and labeling. “I still have trouble getting my label maker to talk to my computer,” Lockhart says with exasperation. “I don’t have an IT [information technology] guy.”

Through it all, Lockhart takes the long view for building a new business model for his family’s ranch. He relates growing beef to producing wine or whiskey: forecasting what consumers will want in the future. “The reason people like our beef,” he explains, “is because of the story behind it. I raise it all right here, and it never leaves the valley. Everybody watches the cattle and whole [life] circle go around.”