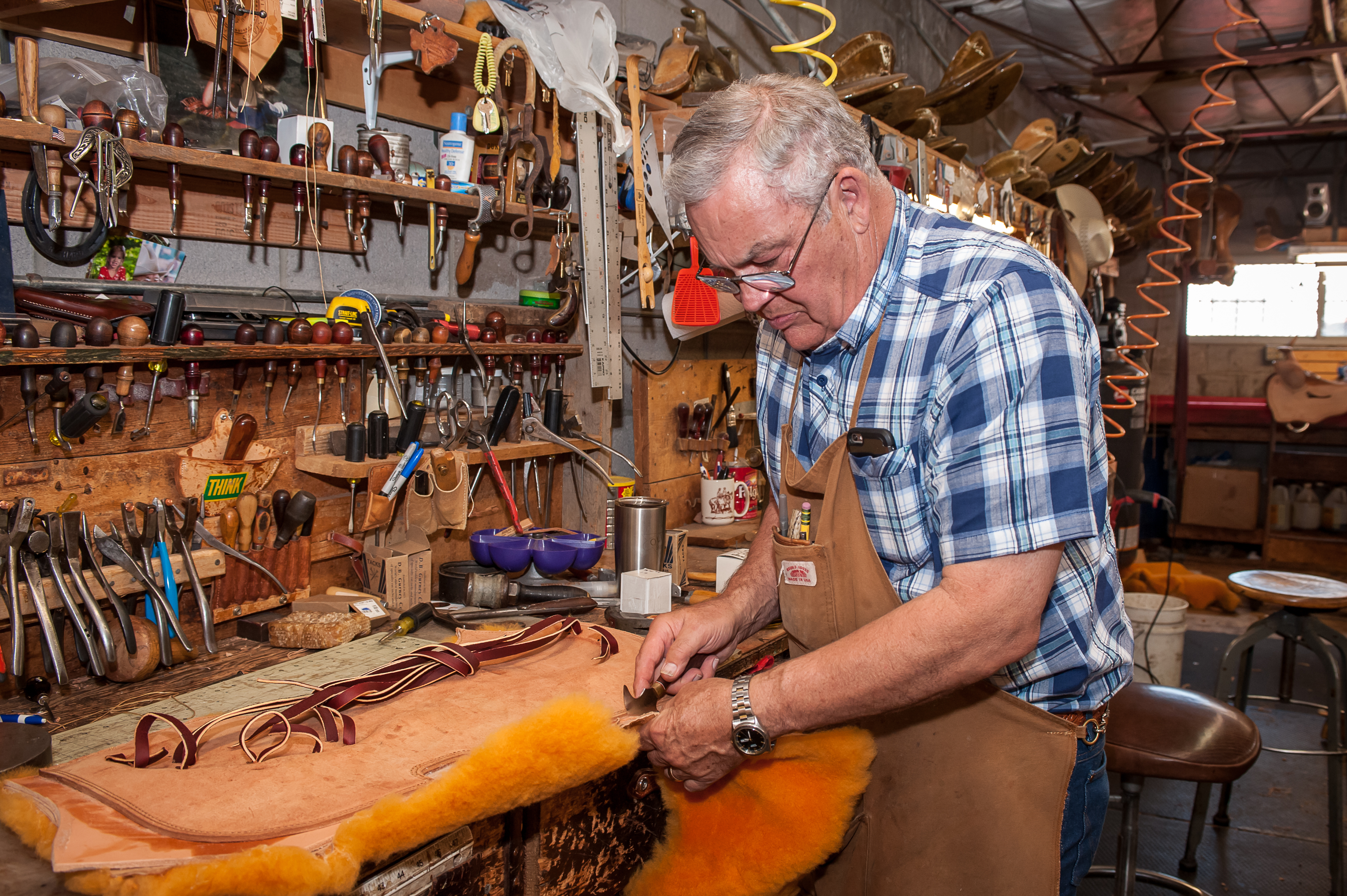 Story and photos by Shaie Williams

The agriculture way of life has been handed down from generation to generation. The skills needed to be successful come from the generations before us. Technology and great inventions make life a little easier at times but the ideas start from past experiences and our past generations. This is what makes our way of life just a little different from the rest of the world.

Richard Oliver, the third generation and current owner, learned the trade from his father Bill Oliver and grandfather C. W. Oliver. Currently Richard Oliver has both of his sons working for him building saddles and learning the business the best way they can – by hands on experience. Bryan Oliver, 43 and his brother Zeb, 40, have both been building saddles and working in the family business for most of their adult lives. They have kids that are slowly learning the craft and family business, making this a saddle shop of five generations.

When you have multiple generations of saddles out there you see what lasts and what works or doesn’t work. Over the years there have been some great tools invented to help along the way, but it still starts at the skills learned from years and years of saddle makers. This knowledge wasn’t all from just the Oliver family. According to Richard there was a time when saddle makers traveled around and worked here and there for a while. This diversity provided a great opportunity to observe how others did things.

The Tree is the Foundation

Like so many other things, the key for success, according to Richard, is the foundation. A good handmade saddle has to start with the tree. A bad tree can ruin a great handmade saddle; same as a great tree is the starting point.

Richard started his “full time” career at the saddle shop in 1970 after returning from college. He has been at the helm for many years. In the last thirty or so years the shop has taught approximately twenty-five different employees the craft of saddle making.   “We have some longevity when it comes to being around and standing behind our work,” Richard states. They currently employ six full-time employees and two part-time. That doesn’t count Richard’s grandchildren hanging around learning the trade, whom he hopes to watch the family’s values and ethics along with the craft passed on to the grandchildren.

Oliver Saddle Shop has made around four thousand saddles just in the time since opening in Amarillo back in 1960. Prior to that Richard isn’t sure of the number. They currently produce around eighty-five handmade saddles a year.

Richard and the Amarillo shop have sent saddles all around the world to places like Austria, Germany, Japan and France. Many a famous people own a handmade saddle or two from Oliver Saddle Shop. Some of the names like the Rothschild family, Rex Allen and even President G. W. Bush. When asked who is the most famous customer he can remember, Richard said, “It’s the everyday working cowboy. They are the famous ones. They are our customers and they keep coming back.” Cowboys like David Ross who has purchased more than twenty-five handmade saddles from Oliver, or families like the Adams family who have purchased saddles for three or four generations.

To celebrate one hundred years of business Oliver Saddle Shop wanted to give back to the working cowboy. The best way that they knew how reach and touch several lives was by having a mini ranch rodeo for fun and as a way to raise some money for the WRCA Crisis Fund and Scholarship. Oliver Saddle Shop made a sizeable contribution from the shop and also helped raise a large amount from the ranch rodeo. The ranch rodeo was a unique set of events. Three-man teams would enter the arena with only four minutes on the clock. They have three head of cattle loose in the arena to tend to. One had to be roped and doctored, one had to be penned, and the other one roped and tied down. The fastest time won. Then, the ranch-style bronc riding is always fun to watch.  All in all it was success with lots of fun and no one seriously hurt expect maybe some pride.  Maybe the ranch rodeo will continue as an annual event.