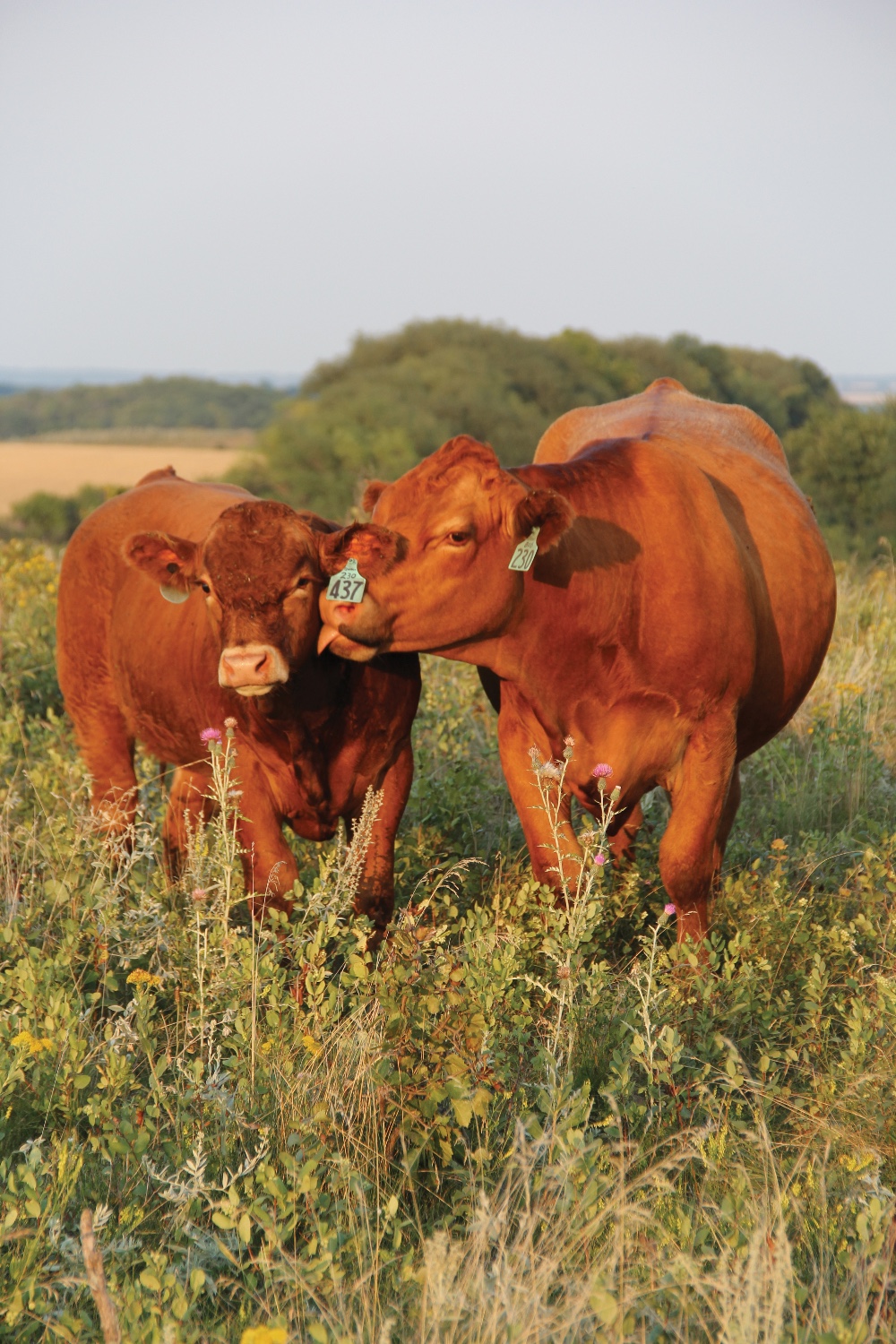 A Valuable EPD Benefits from a ‘BOLT’

Raising cattle is an investment in time, money, and hard work. Since no one wants to waste any of those things, it’s best to be working from good information when making genetic decisions. Recent developments by International Genetic Solutions (IGS), a research consortium of 12 breed associations in the U.S. and Canada, has created notably improved EPD accuracy using a massive pool animals for their National Cattle Evaluation (NCE) and improved computer software.

The recently developed computer software called BOLT (Biometric Open Language Tools), has allowed IGS to further improve the accuracy of the NCE EPDs. Preeminent geneticists Drs. Bruce Golden and Dorian Garrick developed the software. It is unique because scientists can change the model they’re using depending on what trait is being examined; it incorporates genomic data, information from multiple breeds, and an improved prediction of EPD accuracy.

Wade Shafer, Executive Vice President of the American Simmental Association, one of the founding breed associations of IGS, says, “BOLT is, quite frankly, the most powerful software platform ever developed for genetic evaluation purposes. Due to its major strengths (unparalleled computational speed and flexible structure), BOLT allows for the implementation of virtually any statistical approach to be applied to massive sized databases… approaches that, prior to BOLT, were thought to be impossible on large databases.”

And large it is. The IGS NCE database includes over 17 million animals, which allows the prediction to be even more accurate because a larger pool of information paints a more lifelike picture. In the multi-breed database, if an animal from one breed has relatives listed in another breed database, a greater number of known relationships and information will be pooled to improve the accuracy of the genetic prediction.

One of the EPDs that has gotten a huge boost from the sheer volume of information and development of BOLT is stayability, an important marker for predicting if that cow is going to make your investment worthwhile.

“Sustained fertility and long-term cow productivity are important contributors to the profitability of commercial cow-calf producers. Stayability is a measure of reproductive longevity and benefits herd productivity in two ways: through decreased need for replacements and through higher average weaning weights because of the greater number of older cows in production,” says Lauren Hyde, Ph.D., lead geneticist for IGS.

Stayability is a prediction of whether a cow will stay in production until she is six years old. It is a trait that includes fertility but also several reasons for culling, such as hoof and leg soundness, and udder quality.

Jackie Atkins, Ph.D., American Simmental Association (ASA) Director of Science and Education, says, “Stayability is one of the heaviest weighted traits in our All Purpose Index (API). API estimates the profitability of an animal’s calves when a certain percentage of heifers are kept as replacements and the remaining calves are harvested.”

According to Atkins, the BOLT Stayability EPD combines improved methodology for calculating stayability using recent research and the BOLT software and its capabilities. These advancements allowed IGS and ASA to estimate the Stayability for more than just Simmental cattle.

“The new STAY EPD is a multi-breed Stayability calculation so all cattle in the database can have a STAY EPD including hybrid and composite cattle, like SimAngusTM and Simbrah, and purebred cattle from other breeds, for instance Angus,” explains Dr. Atkins.  “Because BOLT was used for the new STAY EPD, we could evaluate the genomic information using Single Step methodology. Using Single Step means the DNA marker information was evaluated at the same time as pedigree and phenotypic information.  It is a much more powerful way of using genomic information. We can use better predictions of the DNA markers for STAY, we can infer DNA markers to other animals in the pedigree, and can incorporate all this together with the pedigree and phenotypic information in one step,” Dr. Atkins concludes.

How exactly the BOLT software works is somewhat confusing, but essentially it is able to more quickly and more directly combine information to make more reliable predications of the EPD’s actual accuracy.  The speed at which they software works was also very helpful when incorporating and cross referencing more than 17 million beef animals across North America.

“Combining databases from 12 breed associations to form the current IGS database was a major undertaking. Steve McGuire, our database manager and an engineer by training, leveraged his 43 years of experience to integrate the data into what is now the largest database for beef cattle evaluation in the world,” says Shafer.

The IGS NCE database is open to the public. Shafer hopes to eventually have a single site where producers can go to access the information, but right now it is accessible through each participating breed association’s website.

Having more confidence in your genetic decisions, especially when you’re dealing with young sires or unproven animals, is now possible with the BOLT EPDs. Because they infuse genetic information, those EPDs will now be much more accurate. Stayability was just one of the first to get the benefit.

“By publishing a Multi-breed Stayability EPD in December 2016, IGS became the first organization to publish EPDs calculated with BOLT. IGS plans to transition all of our EPDs to the BOLT platform in the near future. The transition will not require users of IGS EPDs to do anything differently than they have in the past. It will simply provide them with more reliable EPDs, due to the fact that DNA will be utilized more effectively than ever before,” says Shafer. “Users will simply have more reliable EPDs and indexes—particularly on unproven animals.”

Given how long they’ve been around and how frequently we talk about them, you’d think EPDs would be a tool as commonly used as your saddle. Apparently that’s not always the case. And it’s a prime example of a missed opportunity.

“One point I see frequently is a mistrust of EPDs and Indexes for selecting breeding stock,” says Dr. Jackie Atkins, American Simmental Association (ASA) Director of Science and Education. “The fact that the majority of cattle operations do not use EPDs or Indexes to select their breeding stock is disturbing. Using an animal’s own performance is much less accurate than using an EPD for that trait. The animal’s own performance can be influenced by many things that can’t be passed down to their offspring. For instance, the environmental factors that also affect that trait. Other things like heterosis (or inbreeding) can affect an animal’s own performance but won’t be passed to their offspring.”

It might sound obvious to say, but many believe if you don’t use EPDs you won’t see their benefit. Certainly for older animals, you have all the evidence you need of their performance—their progeny. In this case EPDs are useful for supplying information to customers, but again, it is with younger animals that reliable EPDs can be the most useful.

“EPDs zero in on the animal’s potential as a parent by estimating the animal’s genetic influences on said trait that can be passed to their offspring. EPDs incorporate the animal’s own performance records, their pedigree information, any records on their calves, and DNA markers if available. EPDs encompass all this data to calculate the best prediction of an animal’s progeny for production traits,” says Dr. Atkins.

Further advances, such as the development of BOLT, will only improve EPD prediction and indexes.

“EPDs and Indexes aren’t new technology,” Dr. Atkins adds. “Among animal breeders EPDs and Indexes are undisputed as the best selection tool for deciding future breeding stock (bulls, donor cows, replacement heifers, etc.). Yet, there is a mistrust from the cattle producers—the people that would get the most benefit from using these tools.”

There is no replacing the skill that comes from experience and a well-developed eye, but even the most expert cattle producer might miss out if they don’t take advantage of the tools available to them.