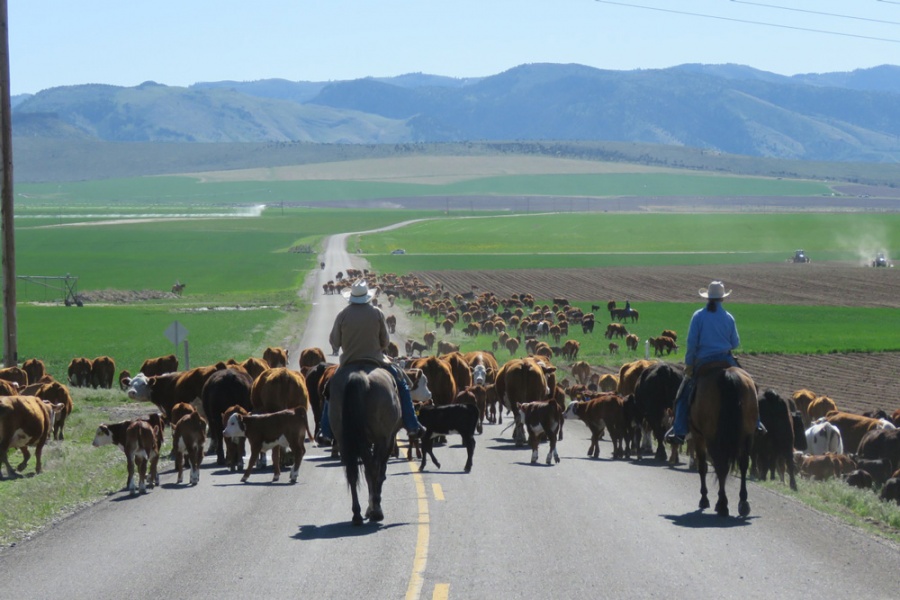 The spring cattle drive is done for another season. A “drive” is the traditional name for moving cows long distances. We call it “the trail,” as in “going up the trail.” There is a subtle but important difference of semantics between trailing cows and driving cows. We still end up pushing the back end, but endeavor to let them “trail” because they know the way and for the most part walk along agreeably.

Trailing days can be beautiful, peaceful days, especially first thing in the morning. And they can be stressful, mind blowing days, maneuvering hundreds of cow-calf pairs past a multitude of obstacles. The first difficulty this year was the temporary three-strand electric fence the department of agriculture installed to keep the herd off a potato field infected with pale cyst nematode. They were afraid the hooves, even along the edge of the road, would transport the pest to neighboring fields. They had five staff persons stationed to divert traffic during that portion of the route. Only a few calves got through the fence, so it was a success. I asked if we could hire them for the rest of the trail!

Other obstacles include yards and gardens in our community. We’ve learned to put up a twine string across driveways. How we appreciate the conscientious country dweller that provides a gate for us to close. Mark found a couple of orange traffic cones in the canal that we used as obstacles this year too. Cows will avoid a seemingly benign roadblock if given the chance. One yard was so vulnerable that I stopped one day and got the cell number of the owner so I could text her before we came by. She and her kids stood guard and helped tremendously.

One morning as we crested the final push out of our farming community heading to range ground, I sat on my horse and visited with a farmer sitting in his pickup. A tractor was working the field behind him. We talked about the challenges of producing food in the fastest growing state in the nation. He said drivers don’t like him moving farming equipment on the road any more than they like to encounter our herd. He said he liked the cow scene, even though they were walking on, and grazing, the edge of his farm. We agreed that those of us in agriculture need to stick together.

I don’t know how much longer we’ll be able to trail cattle to the mountains. It’s an old, old human tradition, taking livestock to grass. The symbiotic relationship between humans, grass and ruminants has been known to cultures for thousands of years. It’s so old that most people don’t even recognize what they’re witnessing. I tell whoever will listen that cows and horses and herding dogs don’t walk any faster than they ever have, even though the pace of technology zooms past us. Whether we as a people can value that, slow down and learn how cows fit in our communities and in the environment remains a question.