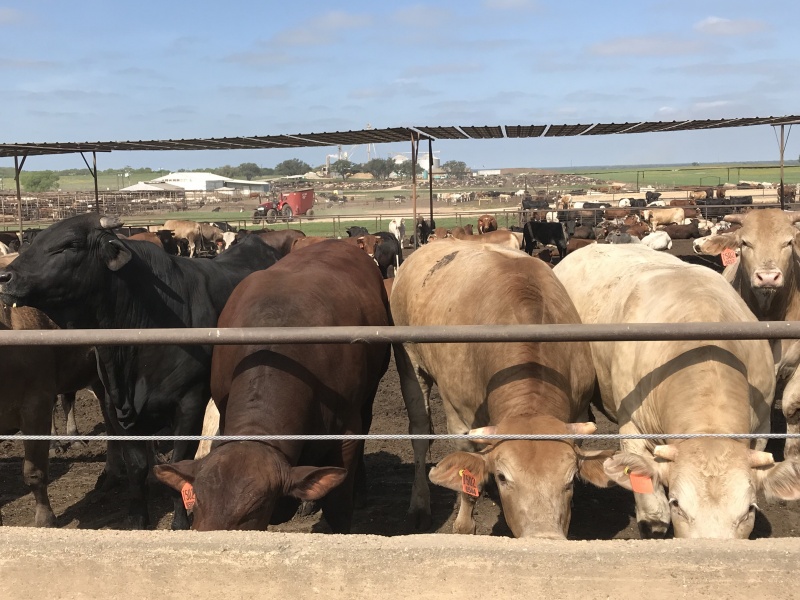 Ranchers who send their calves to a feedlot for custom feeding want the best care possible for those calves, so they can stay healthy, grow well, and make a profit. Luckey Custom Feedlot near Devine, Texas (about 45 miles south of San Antonio in southern Texas) has a reputation for doing a great job with their customers’ cattle.

This feed yard was established in 1982 and feeds cattle for ranchers all over the U.S. (Texas, California, Arizona, New Mexico, Louisiana, Oklahoma, Mississippi, Kentucky, Florida), and some from Mexico. “Our capacity is 22,500 and we are a 100% custom feedlot; we do not own a hoof in this place,” says Colby Rodarte, Assistant General Manager. He’s had that position for 10 years.

“We are Beef Quality Assurance accredited, through the Texas Cattle Feeders Association. They come out once a year for about 5 or 6 hours to audit our books, see where we get our feed from, and if we are taking feed samples and getting analyses. They check the water and our well water analyses, etc. They inspect the feedlot, looking at pen conditions, water troughs (and if they are being cleaned), fences and processing chute, checking for safety issues, etc.” says Rodarte.

Dr. Dan Stafford is the feedlot veterinarian. “We’ve been working with him for over 10 years. He comes once a month, but is always available if we need him for a necropsy, or help us with diagnosis if we have something I’ve never seen before. The new iPhones are a great tool; we can take a photo of what we need to show him, and send him the photo,” says Rodarte.

The cattle come from a wide variety of backgrounds and arrive in various sizes and condition. “The smallest we receive are three-weight (early weaned, young cattle) and we also feed some calf-fed Holsteins. We feed whatever our customers send us and they have a role in everything here that is done. Customers may call and tell us they have a load of cattle to send, and we’ll project an outdate for them. We work off the futures market to see if there will be a profit in those animals. We project feed costs, medicine costs, etc. to give the customer a figure for what it will be,” he says.

“A lot depends on where they are coming from. The cattle from farther away need at least 24 hours of rest when they get here, before we do anything with them. They have a lot of stress behind them,” says Rodarte.
“Depending on where they come from, the owner has usually given us input on their history. It might be the calf crop from that year and they’ve been weaned 45 days, and the owner tells us their vaccine protocol.” Knowing the history and the vaccines they’ve had helps with what the game plan should be when they arrive.

“A customer may tell us he just put these cattle together out of a sale barn and he’s had them about a week and they’ve been eating some hay or a little protein block and once he gets a truckload he is sending them our way. The big thing is to know the background on what the cattle are (and what shots they might have had), when they come to us,” explains Rodarte.

“Ideally, we’d like groups of steers or heifers already preconditioned. Those go on feed nicely, with very few health problems,” he adds.

The facilities at this feedlot are very user-friendly and safe, and there is always fresh feed and clean water. The processing chutes are safe and easy to work the cattle through with very little stress.

“When cattle come in, we classify them as either high-risk animals or low-to-moderate risk, and these have different processing protocols. On the high-risk cattle we give an injectable dewormer and at the same time a dewormer drench, to make sure we get all the internal parasites. We give each animal a lot tag. The animals in a certain pen have the same lot number, but also an individual ID number.”

“We are a BVD-free feedlot, so we test every incoming animal for BVD and for PI (persistently infected) individuals. Ear notch samples are sent to Kansas State Diagnostic Lab. Once the incoming cattle have had 24 hours rest we bring them up and process them, and take those samples. It’s about a 36-hour turnaround to get those results back,” he says. Any cattle that turn up positive can be quarantined.

“We see about 0.3% of those tests come back positive as PI cattle.” These animals are put in a separate area and don’t mingle with the other cattle.

“Incoming high-risk cattle are given a killed-virus vaccine for respiratory diseases. These animals have already been through a lot of stress so we keep the stress to a minimum rather than give them a modified-live vaccine at that point. We also give them an intranasal respiratory vaccine, because it acts quicker,” Rodarte explains.

“We give an 8-way clostridial vaccine, and castrate any that are still bulls. The ones that are under 600 pounds are castrated with a knife, and any that are larger than 600 pounds are banded. At this same time, we tip horns if needed and give an implant. On high-risk cattle we also give a prophylactic mass medication, “says Rodarte.

The processed animals go to the pen they will be in for their stay at the feedlot. “About 7 to 14 days later (or as long as 21 days later) we bring them back in for revaccination with a modified-live virus. The timing of the booster depends on pull percentage rate and daily meeting with head cowboy,” Rodarte explains.

“Starting out, we feed a high protein, balanced receiving diet in conjunction with a strategic bunk hay program based on risk level to ensure cattle get off to a good start. They get about 1.5% -1.8% of body weight at first, easing them gradually onto the more concentrated feed. We also have the flexibility of feeding a medicated receiving additive, fed at 1 gram per 100# body weight for 5 days. This falls under the VFD and is prescribed by our veterinarian. It seems to help them stay healthy,” he says.

The high-risk cattle are left undisturbed in their pen for about two weeks after they come in, without pulling any that might have been getting sick. If the pen rider decides to pull one and bring it into the hospital for treatment as per the veterinary treatment protocol they have chute-side computers and a chute-side scale to help them determine dosage accurately. “Even on the mass treatment when they first come in, we are not working off averages; each animal is weighed and dosed with exactly what it needs. If we pull an animal we also use a thermometer to check temperature. Anything that’s 104.0 or higher gets treated,” Rodarte shares.

At the discretion of the pen rider, the animal then goes either to a sick pen for further observation and possible follow-up treatment and more recovery time, or goes back to the home pen after one treatment. Cattle are less stressed if they can be back with their pen-mates.

“When our cowboys start checking cattle every morning, their first pen they ride is the sick pen. They determine which animals need to be re-treated, how they are responding to the previous day’s or 2 day’s prior treatment. Our antibiotic choices can and do change at times, based upon data results accumulated by our computer system and individual ID system that is incorporated chute-side at our hospital pens,” he says.

The low-to-moderate risk cattle are handled a little differently than the high-risk groups. These have gone through some type of vaccination program before they arrived. “We know the producer, and what he has done with these calves,” Rodarte says. “It might be someone’s calf crop that has already been weaned. The cattle that come in from Mexico we also consider to be preconditioned; the health on those is generally good.”

When the low-to-moderate risk cattle come in, they receive injectable dewormer plus a drench, and get a lot tag and PI test. “They get an 8-way shot, and then instead of the killed virus we go ahead and hit them with modified-live. If they’ve been vaccinated already (at home) all they need is a booster,” he explains.

They’ve already been castrated, and any horns are usually already tipped, so all they need is an implant. These cattle generally acclimate into their new environment with very few problems. “These are the kind of cattle I always wish I had a feedlot full of! They start on feed easier, and these cattle require about 60% less bunk hay. We put our hay out by hand—the average coastal hay bale weighs 50 to 60 pounds. These calves move up to a regular ration quicker and easier,” he says.

“They usually have no health problems at all, and death loss is less than half a percent. These low-to-moderate risk cattle rarely get treated,” says Rodarte.

Kane Beef, at Corpus Christi, Texas takes about 95% of their cattle for harvest. A few customers send theirs a different direction. “We’ve sent some to Cargill,” Rodarte adds, “and we have one client who owns a small packing house where he harvests his cattle; we just feed them for him. He gets about a load each week to harvest, and sells the meat in quarters, to people who want beef for their freezer.”

Luckey Custom Feedlot feels they have a great team of people who make it work, and their goal is to provide customers with the highest quality of service and feed ingredients to ensure the highest return on their cattle.