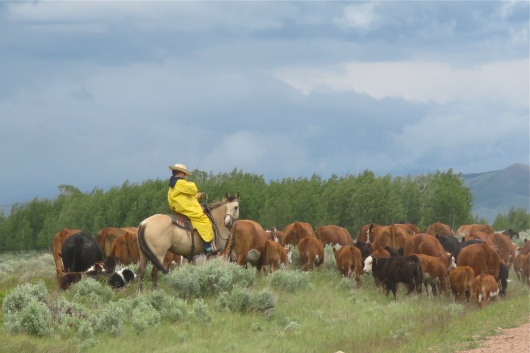 June is slipping away. June always does that.
We had a major move over the last mountain with the cattle. The route is convoluted. It includes a blind corner and a steep grade. It’s a trick to execute with a big herd, so we determined to cut them in half. We were able to make a clean sweep and not separate any cows from their calves and got the first herd well along their way before dropping three riders to gather the remaining bunch. When the first herd topped the mountain, Anna and I fell back as well and left five riders to get them the rest of the way.

We found Mark and his skeleton crew with the second herd gathered and just about to attempt a creek crossing. They were glad to have us and our three border collies.

When the first cows crossed the creek, they immediately headed for home instead of climbing the hill. It was hidden to us and being otherwise occupied with the tail end, we didn’t see their escape. We had to gallop around the lead and get them turned around before we could attempt the climb. After much ado we got them lined out just in time to face two side-by-sides with flags fluttering on each side of the machines. This caused an about-face with the lead which we aggressively mauled back to face the right direction.

The last excitement for the day was doling out the stash of yellow slickers we have stowed in the horse trailer just before the rain started. The day ended well, but I suffered the last two hours thinking I could forego my biking shorts hidden under my jeans. I won’t do that again.

Since then we’ve had the disappointing experience of a thief in the mountains that not only stole from us, but left a gate open and let the cows into a neighboring field. We hate to lock things up, but that’s our only recourse.

It’s lovely weather, we’ve received lots of rain and the ranch is exploding with growth. We have supper on the terrace every evening and make a point to soak in the beauty that surrounds us. But we’re tired and behind as usual. We have to bolster one another up to let some of it go and quit worrying. I asked Mark what it was like to be him and he said with a smile, “I’m not bored.”