The Story of Oregon’s Darrel Bagley 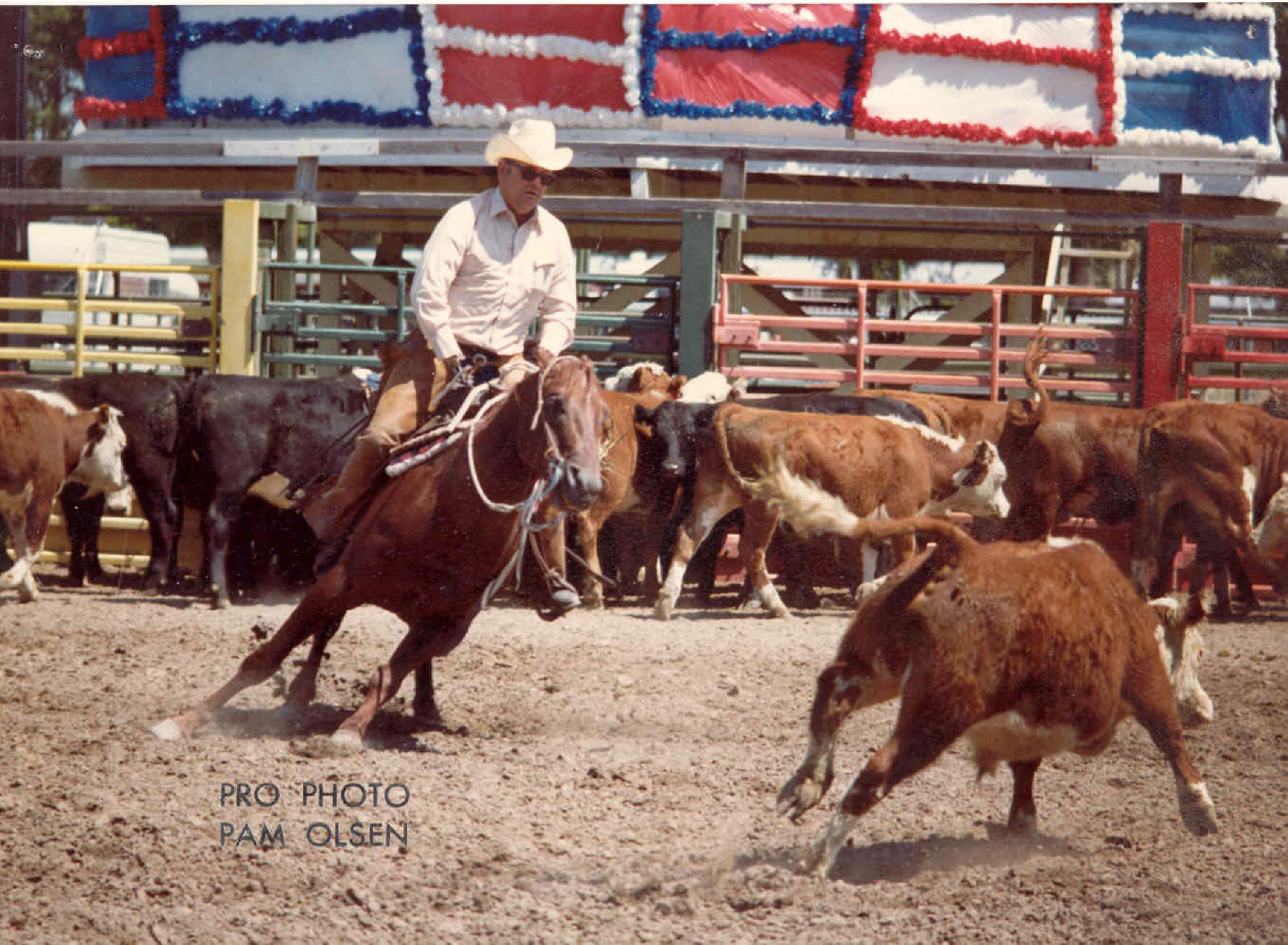 [On Mother’s Day, 2017, friends and family gathered at the Cowboy Church at Lemhi, Idaho for a celebration of life to honor a great rancher/cowman who inspired us with his courage, astute knowledge of cattle and ranching, and dogged determination.]

Darrel Bagley’s parents homesteaded in the sandhills of eastern Colorado in 1906.  He was born December 3, 1926 and grew up helping his dad farm with horses.  Darrel, his mom and siblings did most of the ranch work while his father taught school.

Blizzards were common.  “Dad would get up early to go to school and listen to our radio to get weather reports from Denver.  If it was going to be bad he’d shake us awake and tell us to go gather the cattle,” said Darrel.

“One pasture was 3 miles away.  We had to get the cows rounded up before the blizzard hit.  If we didn’t have them gathered before it hit, they piled up in the low spots to get out of the wind. We’d get off our horses and break frozen snow away from their heads so they could see and get some air.”

Darrel married his childhood sweetheart after a stint in the Army and came home to take over the ranch.  He raised cattle and horses, bought and sold horses, broke horses for people, and worked for other farmers and ranchers as he and Ruth struggled to make ends meet.  Their children, Larry and Diann, grew up riding and taking care of cattle.

Later he bought a ranch in the mountains near Eagle, Colorado and ran 200 cattle on BLM and FS allotments with 4 other ranchers.  He and his kids did the range riding.

The 4-H program at Eagle was a little barn on a vacant lot where a few kids showed steers, but the town folks wanted it moved out of town.  Darrel talked another rancher into selling a piece of land to the county for a Fairgrounds.  He and his neighbors cleared the ground, built the Fairgrounds, and started a 4-H steer show.  He also started a Little Britches Rodeo and became president of the cattlemen’s association.

His ranch was along the river. Sometimes ice plugged the channel, flooding the buildings unless it was kept open by dynamiting the ice jam.  The winter of 1961-62 was really bad.  Darrel went out late one evening to check calving cows, and it was flooding so he decided to blast again.

“I’d chop a hole in the ice, and drop dynamite in the hole. That night I tried to light the fuse, but it didn’t fizz so I thought it hadn’t lit.  I reached in my pocket to get my second match and it went off in my hand,” Darrel said.

Larry came home from basketball practice, found his father lying there and went for help.  The local ambulance took him 30 miles to the nearest hospital at Glenwood Springs.  The blast damaged his eyes and took off both hands above the wrists.

“The doctors told my family I wouldn’t make it through the night.  Then they said I wouldn’t live more than 3 days, because they thought everything inside me would quit working.  But I fooled them.  Nobody thought I could keep ranching, but 11 days later I walked out of the hospital and went home.  We were calving, and I was soon back on my horse.  My head was bandaged, but if I raised my head a little I could see out through the bottom of my eyes.  My arm stumps were bandaged so I tied my reins together and looped them over my arms.”

He later had cornea transplants, and went to the VA hospital to be fitted with prostheses.  “They wanted me to stay longer to show me how to use them but I told them I had a ranch to run.  I never did get artificial hands, just hooks that open and close, but I managed to do the things I needed to do.  I just kept on ranching and bought a few more ranches.”

He ranched for 10 years at Eagle, but the area between Vale and Aspen became popular for recreation and skiing so he looked for another ranch.  “While we were still at Eagle, my kids got married.  I located some ranches near Salmon, Idaho—one for us, one for Larry and his wife, and one for Diann and her husband,” said Darrel.

Not long after, Darrel and Ruth were divorced.  Later he met and married Traudy, who was originally from Austria, and bought two more ranches.  By that time he had 5 grandchildren.  They enjoyed helping with cattle and horses.

He built an arena, and neighborhood kids came to practice roping or cutting.  He organized a horse show association at Salmon that included Challis and Mackay, with an awards night once a year and an old-timers’ rodeo at Mackay.

His multiple ranches included 2600 acres (about 800 acres irrigated and the rest mountain pasture).  Cattle spent summers on BLM from mid-May until mid-June, then went to Forest range until October 15th.

“We had 650 cows and kept 200 calves as yearlings.  The herd was Hereford and some Angus cows, bred to Shorthorn bulls.  That made a nice cross and we bred the heifers back to Hereford bulls,” he said.

Darrel liked to buy bulls as calves and grow them out himself.  “I’d feed 3 pounds of oats per head per day and good hay, and they didn’t get too fat.  They didn’t have feet problems and they lasted longer.”

The Bagleys had Quarter Horse production sales at the ranch.  “We ran our mares and foals on mountain pastures.  The foals developed strong feet and legs and agility.  We sold most of our horses as started 2-year-olds, and started them ourselves.  Along with all our ranch chores we were always starting horses.  We used our horses for everything—racing, rodeo, ranching–and had a lot of fun,” Darrel said.

He’d always wanted a ranch in Nebraska.  “It’s not as dry as Idaho or Colorado.  You don’t have to irrigate.  You just cut meadows for hay, and don’t need much hay.  You just check cows; it’s easy ranching.  After the grandkids got out of high school I sold our Idaho ranches and bought a ranch in Nebraska in 1989.  I traded a good horse for 12 registered Hereford bulls to take to Nebraska,” he said.

The ranch bordered the North Platte River for 5 miles, lined with cottonwoods, so cattle had protection from blizzards. Darrel also planted 5000 trees for a shelterbelt around the catch pasture.

“We had no intentions of selling that ranch, but then some folks came from Wyoming looking for a ranch and wanted to buy mine for twice what I paid for it.  So we sold that ranch and looked for another place.  Traudy and I drove through a lot of country and looked at a lot of ranches—and found one near Bonanza, Oregon.  We bought it with the cattle on it, and also moved 100 of our first calvers from Nebraska.”

He bought a neighboring place with a 290-head BLM permit to add to the 180-head permit that surrounded his irrigated meadows.  Darrel put up 800 acres of hay, all flood irrigated, and used the water 4 or 5 times before it got down to the hay meadows.  “The former owner put ditches onto the juniper ridges; water flows down over 2000 acres and ends up on the meadows.”

Today the ranch runs 500 cows.  He put up round bales, fed by unrolling them with a tractor.  “It’s an easy way to feed.  I started doing that in Idaho and Nebraska because I never did like pitching hay!”  When he passed away at age 90 he was still ranching, doing what he loved.