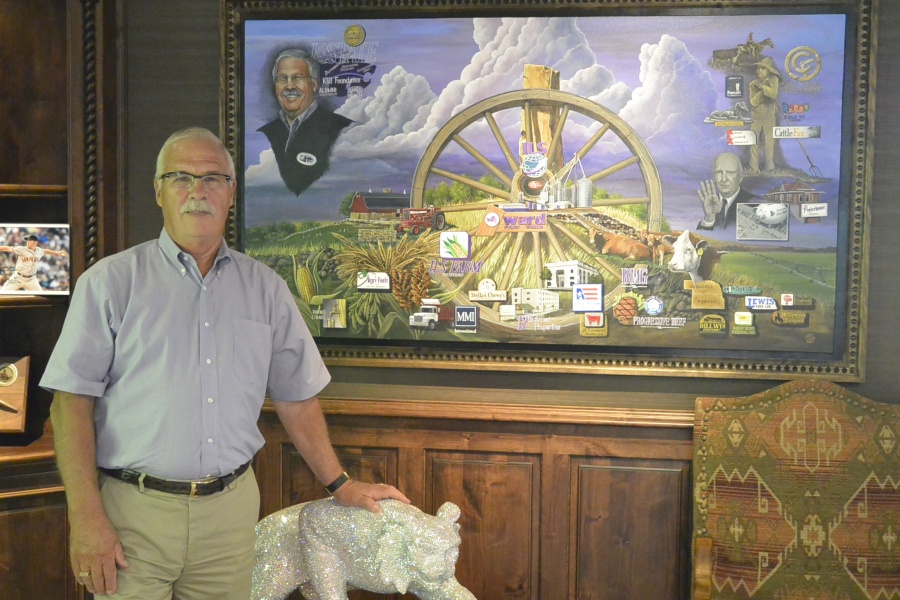 Lee Borck, Manhattan, Kan., has known hard times and boom, seen the impact on others as well as his own enterprises. That could describe a lot of cattle feeders, but Borck stands out for his record of leadership and overcoming adversity through cooperative efforts.

That’s why the Feeding Quality Forum honored this master of ag finance and “business by the numbers” with its 2017 Industry Achievement Award.

Borck gives credit to mentors and partners over the years, and willingness to fail sometimes to stay ahead of the curve and win most of the time.

Growing up on the family’s homestead near Blue Rapids, Kan., he was mentored by a father who farmed through the Great Depression.  He earned his degree in ag economics at Kansas State in 1970.

Cattle feeders know Borck as current chairman of both Innovative Livestock Services and The Beef Marketing Group Cooperative, but he’s also served as president of the Kansas Livestock Association and of CattleFax.

The road to indelible marks on the industry began with his first job, eight years as a loan officer with the Farm Credit System’s Production Credit Association (PCA) in Larned, Kan., before he started down the path of being a cattle feeder in that community.

“They were the folks that weren’t afraid to try new things,” he says. “They were taking more risk. They got more bumps, but they got more rewards at the same time.”

One thing he learned from looking over loans at PCA, however: “the mistakes people made in the way they looked at their business plan and not thinking far enough out in front.”

Borck bought into Ward Feedlot at Larned in 1978. Interest would soon climb to 18% as the young feeder built on lots of small deals and fought a 50-cent regional discount vs western Kansas. By 1988, he’d had more than enough of that and called several area feedlots with plans that became The Beef Marketing Group (BMG)Cooperative.

“We had a lot more packers then, but it was a game of numbers,” he says. “If you had the numbers, you could attract packers and get a better price.” Western feedlots were warning ranchers away from their eastern competition based on that discount.

“Well, you could either have capital or you could have cooperation,” Borck says. “We didn’t have any capital, but we decided to try to pool our cattle together. And it was the Capper-Volstead Act at its finest, negotiating price together without having restriction of trade from competitors.”

Excel, the Cargill forerunner, opened by paying “the cartel,” as detractors called it, 50 cents a hundred more than the western Kansas price on 50,000 Holsteins in 1988. The competition took notice.

The cooperative organizer was fast becoming an industry leader, for which he credits the Kansas Livestock Association and the rise of information sharing.

BMG members used faxes to share packer bids in 1993, and also began a marketing relationship with IBP, now Tyson, that’s still in effect, getting past the controversies of captive supply and using others cash bids for a base.

“We traded cattle every day of the week or you would sit there and argue all week long over 25 cents a hundred,” Borck recalls. “And it just appeared that there was so much more benefit out of spending time figuring how to be a better cattle feeder and do what we did in a more efficient way.”

Part of the deal with IBP was the right to harvest data on all cattle. BMG’s first 500,000 carcass and closeout records formed the foundation of Vet Life’s Benchmark program, but BMG members keep learning from data today.

“Most everybody in the business at that time knew that if a steer gained 3 pounds a day and it converted 6.2, you were doing a pretty good job,” Borck says. “But nobody knew the difference between feeding an animal for 40 cents and 45 cents.”

Performance targets may update to nearly 4 pounds daily gain at 5.6 conversion, but Borck says feeders still wonder why pens vary from 75- to 80-cent cost of gain.

“Information has been a huge part of my career,” he notes. “I wasn’t really a feedyard manager but I knew how to massage numbers a little bit and figure out what they said”—with the help of partners and consultants.

“Anybody that tells you I did it my way and it didn’t take anybody else, they’re not being very truthful with you. My partners are, behind my family, the dearest thing I’ve got. And they deserve every bit as much credit as what I do for any successes.”