Home » One Gooseneck At A Time

Mark Harmon is sitting in a truck stop, not far from Joplin Regional Stockyards (JRS) where he wears several hats; among them, handling communications and public relations. Harmon has been with JRS for more than 35 years. In a few days, he’ll help run cattle into the sale ring.

“We built this empire on gooseneck trailer loads.”

Harmon’s word ‘empire’ conjures up images of cattle barons, but most of JRS’s sellers have herds of less than 50 cows. Most of them come from within a 100-mile-radius.

One such producer is Kelly Essary, who runs a typically small operation. On this day he brought 37 head from Crane, a small town about 60 miles away. He keeps coming back because of the service. “I feel like I get the most that my calves are worth that day.” JRS has plenty of buyers, too. Cows get sold quickly so shrink is less of a concern.

Every seller I spoke with said there were other sale barns closer to home.

But they choose Joplin.

Every Monday – even on Monday May 23, 2011, one day after an F-5 tornado slammed into nearby Joplin -hundreds of trailers show up at JRS in Carthage, MO, for the weekly feeder sale. On that terrible Monday in 2011, after an even more terrible Sunday, business needed to carry on as usual, even though hearts were heavy for neighbors and friends who lost loved ones and property. But there were still trailers full of cattle to be sold.

That same week, JRS raised more than $15,000 for tornado relief and as recovery efforts were in full swing, JRS grill-teams cooked and served morethan 13,000 hamburgers to volunteers who flooded into Joplin to help with
the cleanup.

TOMORROW MIGHT BE A GOOD DAY
Scott Kirby has been coming to JRS for more than 25 years, buying for JBS, one of the larger feeder-cattlebuyers in the country. The Brazilian owned company might be the world’s largest protein company; perhaps better known to American consumers under brand names such as Swift or Pilgrim’s. “We like the way cattle perform out of this area,” he maintains, “conditions are good.” Kirby will buy between 500-1,000 head and is at JRS almost every week.

While not Superior-sized, JRS is a leader in video auctions too, holding weekly sales.

More than 70 Field Reps work closely with producers. If they sense the timing is right, the market is good, a call could go out on a Sunday suggesting that tomorrow might be a good day to load up and make a drive. Seller Dean Jeffield of Jay, OK, confirms, “I rely on my field rep John Simmons to tell me when to sell them and how to sell them, to get the most money out of them.” 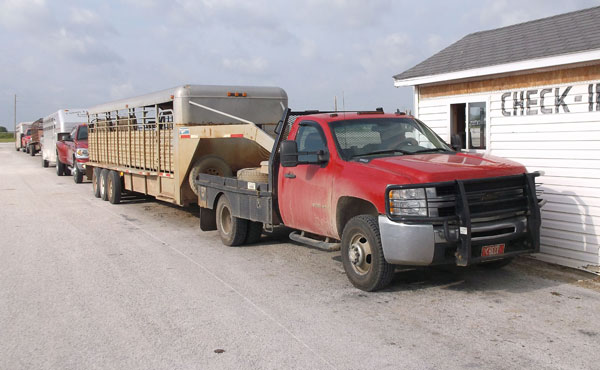 One JRS innovation goes by the name “commingling.” Harmon explains, “We take cattle from different producers. We grade them, weigh them and put them in larger bunches.” One week he estimated they had 400 head of cattle  from almost 100 different producers. “It helps the small guy. That’s our bread and butter.”

This makes a little sheet of paper, called the Drive-In Record, very important. Sellers get one at check-in and it is passed from wrangler to wrangler to ring man to the scale master; who posts the weights and prices that show up on video displays in the sale barn. JRS can’t influence the selling price but they do get a piece of it, every time.

Feeder cows generate $17/head commission and more, depending on other services that may be rendered, such as vet inspections.

But high or low, JRS gets paid and so does the seller. He walks out the front door with money in his pocket, to the tune of $300-350 million per year. Much of that gets pumped backed into the local and regional economy.

Harmon’s take sums it up well.

“When that guy backs in there, in 30-seconds, his year’s worth of work is turned into cash.”

His boss, Jackie Moore, expands on the trust involved in that exchange. “It has always meant a lot to me that when you back up to my dock and unload your calves, people say; ‘Here Jackie, here’s my livelihood. Here’s what I worked all year to produce and here’s how I’m gonna make my farm payment, my truck payment. I’m gonna put my livelihood in your hands. You take care of it.’”

ALL ABOUT HELPING PRODUCERS SUCCEED

Apart from size and volume, what sets JRS apart may be the team at the top. Jackie Moore and brother-in-law Steve Owens have been leading JRS as a team since 1986.

Jackie Moore went to auctioneer school at the age of 13. From there it was a predictable leap to managing Saturday afternoon auctions. Running JRS with his brother-in-law began in another location in Joplin before they moved to Carthage in 1995. Added bonus; no stoplights between the sale barn and Interstate 44.

Moore, Owens and I sat down in their restaurant above the sales arena.Moore is the cattle guy, the auctioneer, and Owens handles the operational and financial side of things.

Some of the terms Moore uses to describe JRS don’t sound very rancher-like: forward contracting, risk management, equity and hedging. But at his core, Moore is about partnerships and helping producers succeed. And those terms are generously sprinkled throughout our short conversation.

“Our mission has always been to work for our producers and let them know things coming down the road that will benefit them and keep them profitable,” Moore explains.

“Anything out there on the horizon that’s going to add value for our producers, we want them to know about it, whether they use it or not. We want them to have all the tools to stay profitable.”

Those tools? Commingling has been mentioned. Video auctions. A simple vaccination regimen that JRS recommends for its sellers. BQA. Publications. Seminars. Forward contracting. Moore describes how that last one played out on a recent sale day;

“On Monday, a guy in western Kansas bought up two loads of 400 lb. calves,” Moore recalls. “He wants to try to sell them that night on video. We didn’t have a video of them. So I said (in the video auction) ‘I got two loads of steers in Marion, KS. A guy bought them here tonight. He wants to deliver them in August. They’ll weigh 625.’ We sold them or $2.16.

“Those steers cost him $2.41. He didn’t want the risk of owning those cattle one more day without having them sold. Those cattle actually pencil close to a $300/head profit between now and August. Who has seen a better scenario than that? A banker doesn’t have a problem with that. ‘I bought cattle today at $1,060/head and I sold them today for $1,340/head.’” 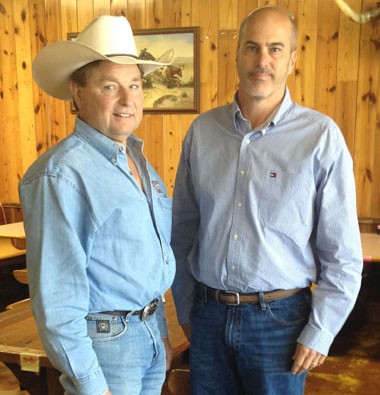 MANAGING THE MIDDLE
Both Moore and Harmon mentioned a unique sort of partnership that exemplifies their commitment to helping existing producers and those who want to get into this expensive game.

A man in Crane was making his living mowing and had access to land, but no capital. He approached Moore with an interest to get into the business.

Moore set him up to background some cattle. This “backgrounder” made $70,000 last year, Harmon noted. Moore calls this “managing the middle.” According to Harmon, Moore probably has 20,000 head out on background.

Moore picks up the conversation again. “We turn out a lot of cattle. Some of these things may not be the most profitable for us. But if we can show a profit and get some young producers in the business and up on
their feet and going…” He adds, “All we are is a service business. We feel like we are partners. Their success is our success.” JRS’s strategy is to remain focused on the smaller producer. “A guy that’s got 5,000 cows probably doesn’t need us. The guy with 50 cows does.

They’re the ones we’re trying to keep in business and keep profitable by giving them the tools they need. The small producers are the ones we’re trying to educate on what’s out there and what’s going on in our business.” Some of Moore’s words sound like clichés but you also get a strong sense that he means all of them, sincerely. He talked about being somebody producers could “lean on”. His customers are “always right.” His most important lesson learned?

“Do business with integrity and honesty. We don’t do everything right, we can’t make it perfect, but we do it with integrity.” He emphasized JRS being a family business “just like most of those family farms – our producers.” His two sons work for JRS; son Skyler already fills the auctioneer’s chair. Moore had several bankers waiting for him while we chatted so he wrapped things up.

“The sale barn is not going away. Video is just another option for us to sell more cattle. As long as we have  small producers, we are going to have a physical location.”

Beef prices are high right now, but the bubble may burst eventually, or at least leak. Is Moore worried?

“That’s what makes it exciting. You gotta have the gambler in you to make it through the highs-and-lows. But if you can manage your risk and your grass, you’ll survive and come through it just fine. You can’t hardly starve one of us hillbillies to death. We just live as poor as we need to live to survive.”